Description of globalisation of the economy is diversifying

The description of global value chains advances as international statistical projects are completed. According to the preliminary results of the OECD and WTO’s joint initiative TiVA (Trade in Value Added), Finland's dependency on international trade does not differ much from other OECD countries.

In the age of multi-national enterprises, statistics compilation must offer answers to more complicated questions than before. Conventional statistics on international trade give an exact description of the goods an individual country exports or imports. However, statistics describing international trade should nowadays give an answer not only to the question what goods are exchanged but also to: Who is trading, with whom and how?

Income and expenditure recordings based on the exchange of economic ownership also require at times that the physical movement of goods from one country to another must be separated in statistical compilation from actual international trade. A real challenge for national accounts and business statistics at the time of blurring country borders is to ensure that all production, income and expenditure get covered – and only once.

The fact that statistics on international trade stick to the gross values of exports and imports also weakens their usability. In the world of global production arrangements, gross values easily get multiplied, when raw materials and semi-finished products are moved from one country to another. Therefore, the statistical description should offer statistical figures in net based on national value added as well, so as to make it easier to assess the effects of international trade on the national economy.

An excellent example of mushrooming of export figures is the analysis published by ETLA in 2011 on the value formation of a Nokia phone (Ali-Yrkkö, Rouvinen, Seppälä and Ylä-Anttila). The share of the final assembly in China was around two per cent of the value of a phone, but the transfer of the phone from the factory in China to be sold to US consumers was recorded as exports from China at the phone's full market value.

In the next few years, the description of value chains and value added-based international trade will advance when international development projects are completed. The largest international projects are the EU's FIGARO (Full International and Global Accounts for Research in Input-Output Analysis) and the joint OECD and WTO initiative TiVA (Trade in Value Added).

The key content of both projects is the combination of national statistics on international trade and national accounts supply and use tables into a global research framework for value chains.

The TiVA framework has also been extended by adding information on foreign investments and the revenue accrued from them to it. The addition of revenue data is important because part of national value added is directed as dividends and interest expenditure to foreign owners.

When these projects are completed, they provide valuable data for studying international trade, global value chains, economic growth, productivity, material flows and environmental impacts, for example. Finland's statistical data are included in these projects. Preliminary results will be available in the course of 2017.

The TiVa initiative combines country-specific macro level data. It has been found that asymmetries in the statistics between countries bring great challenges to this work. For instance, statistical differences connected to the coverage of data or valuation bases often lead to exports of an individual country not corresponding to imports of a counterparty although the theory assumes this and international recording standards guide to it.

The detected asymmetries have made statistics producers realise that it is no longer possible to produce all national statistics alone in the globalised world. A key objective for the internal consistency of an individual country's statistics may now, in a bad case, result in the picture given by business statistics and national accounts on the country’s economic development being congruent even though it is not true.

Therefore, statistical authorities in different countries should in future tighten their mutual collaboration and aim as much as possible towards reliable and data secure exchange of unit-level data concerning global enterprises.

Statistics production has been developed over the 2000s to correspond to the changed operating mode of enterprises often by means of reviews. (See the information box at the end of the article.)

Preliminary results on the TiVA initiative are already available from 2011. The world has certainly changed significantly in six years, but as the development work is finished, more recent years will be included faster. The OECD aims to combine data for 2012 to 2014 to the research framework in the next few months.

In the TiVA initiative, data from different countries are combined using various estimation and balancing measures. For this reason, the obtained figures are not the countries’ official statistics, but they are well suited as indicators describing the role of different countries in global value chains.

Figures 1 and 2 show examples of new ways of examining the significance of foreign enterprises. Earlier, exports and imports used to be proportioned to the value of gross domestic product. This type of examination may have led to misunderstandings about the significance of international trade for the economy of an individual country.

Figure 1. Significance of foreign enterprises in OECD countries in 2011, viewpoint based on value added 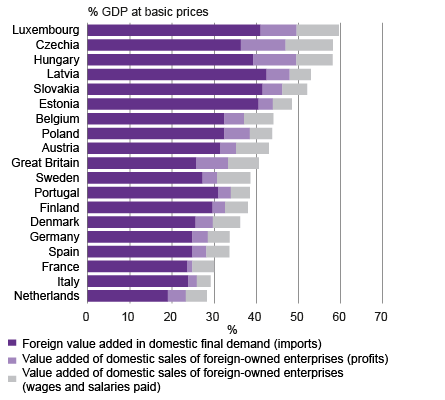 Compared with other OECD countries, the share of foreign enterprises is average and similar to that in Sweden or Denmark. Figure 1 also gives a breakdown of profits accumulated from sales in Finland by foreign-owned enterprises operating in Finland, which are most often repatriated to the foreign owner.

The share of this revenue is around a few percentage points of GDP. In case the revenue generated is invested in Finland or is left as cash office in a Finnish affiliate, they are recorded in national accounts as reinvested earnings, which, similarly as repatriated revenue, diminishes gross national income, but not gross domestic product.

A corresponding examination can be produced about the significance of value added-based exports to the country’s economy. Figure 2 shows that the share of export demand in our gross domestic product was 28 per cent in 2011.

Figure 2. Share of exports in gross domestic product by the enterprise's owner type in 2011 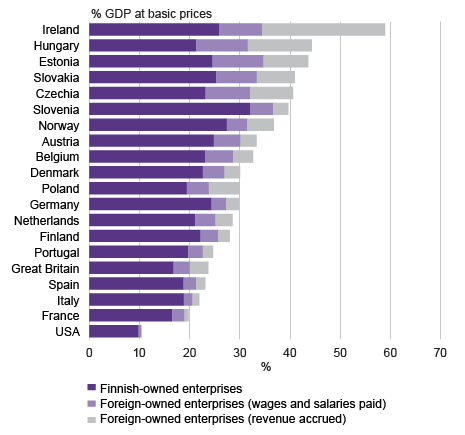 The customary way to proportion gross exports to GDP produces a share of 39 per cent, so the difference is significant. Of this 28 per cent, exports of domestic enterprises form 22 percentage points and exports of foreign-owned enterprises operating in Finland six per cent.

The domestic value added of exports of foreign-owned enterprises is divided into wages and salaries paid in Finland and profits accumulated. Figure 2 shows that Finland was not a particularly export-dependent economy in 2011 in a comparison of OECD countries.

A third example of the results obtained by the TiVA data is presented in Figure 3, which gives the share of service exports in gross exports.

Figure 3. Share of services’ value added in gross exports (goods and services) in 2011 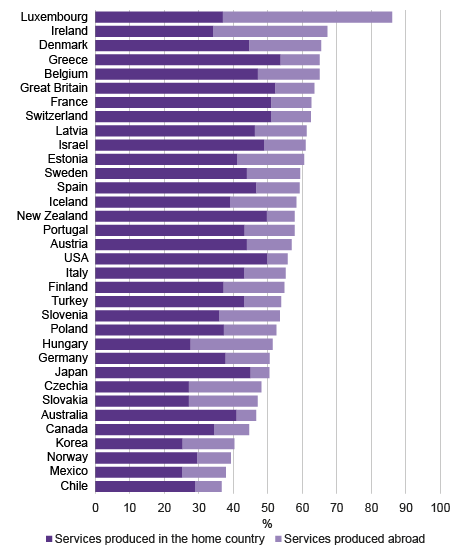 The share for Finland calculated in this way is around one half, although the share of service exports in total exports has been around 30 per cent in recent years. The difference is explained by many products exported as goods requiring plenty of services acquired from the home country or abroad in order to be produced. The significance of services would be even bigger if account could also be taken of the share of services, such as planning and marketing, produced by the enterprise engaged in goods exports.

TiVA indicates that the division of Finnish exports into goods and services does not appear to differ much from other developed countries.

Changes in globalisation statistics in the 2000s 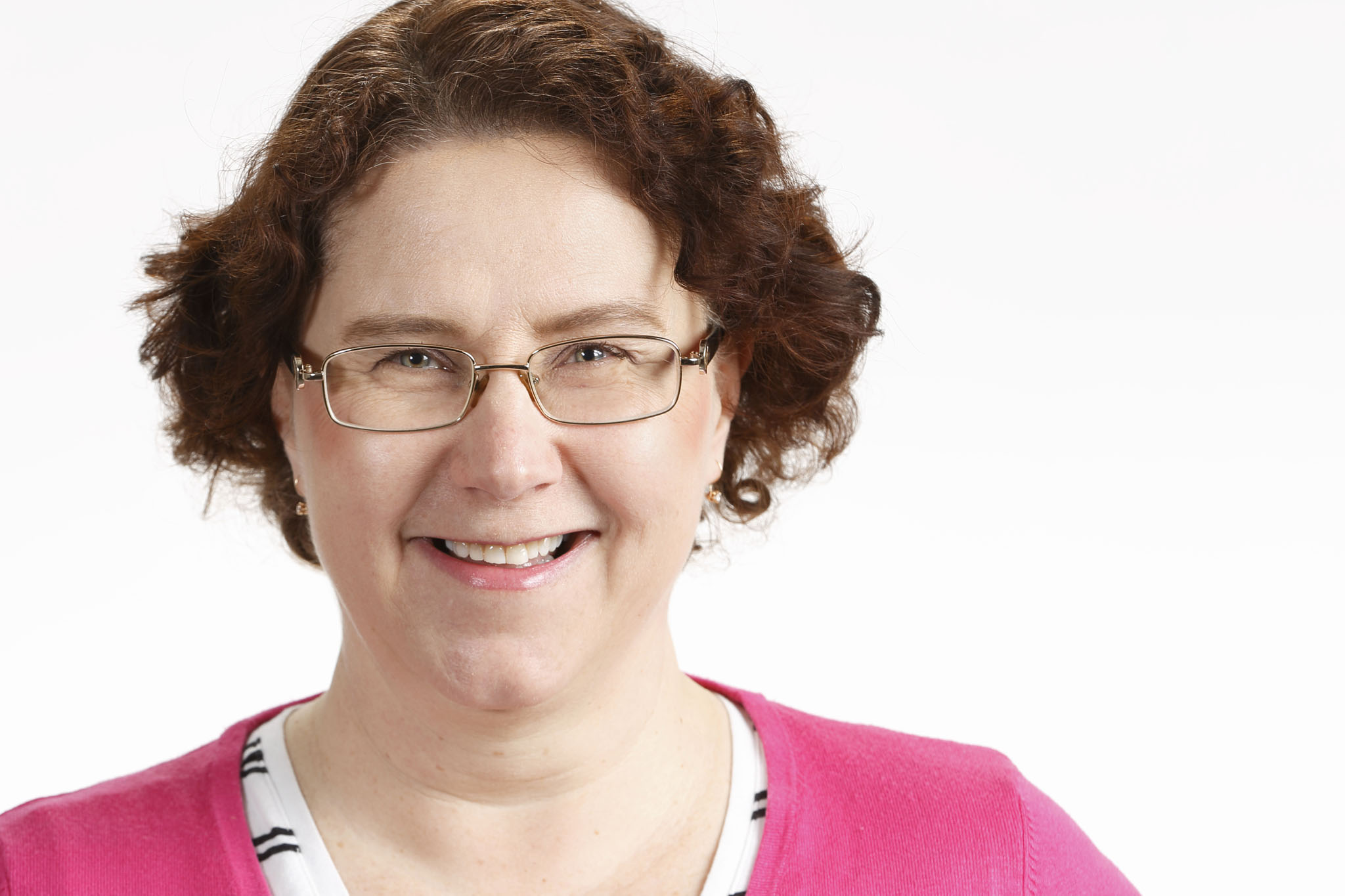 Fundamental principles of statistics into broader use in society 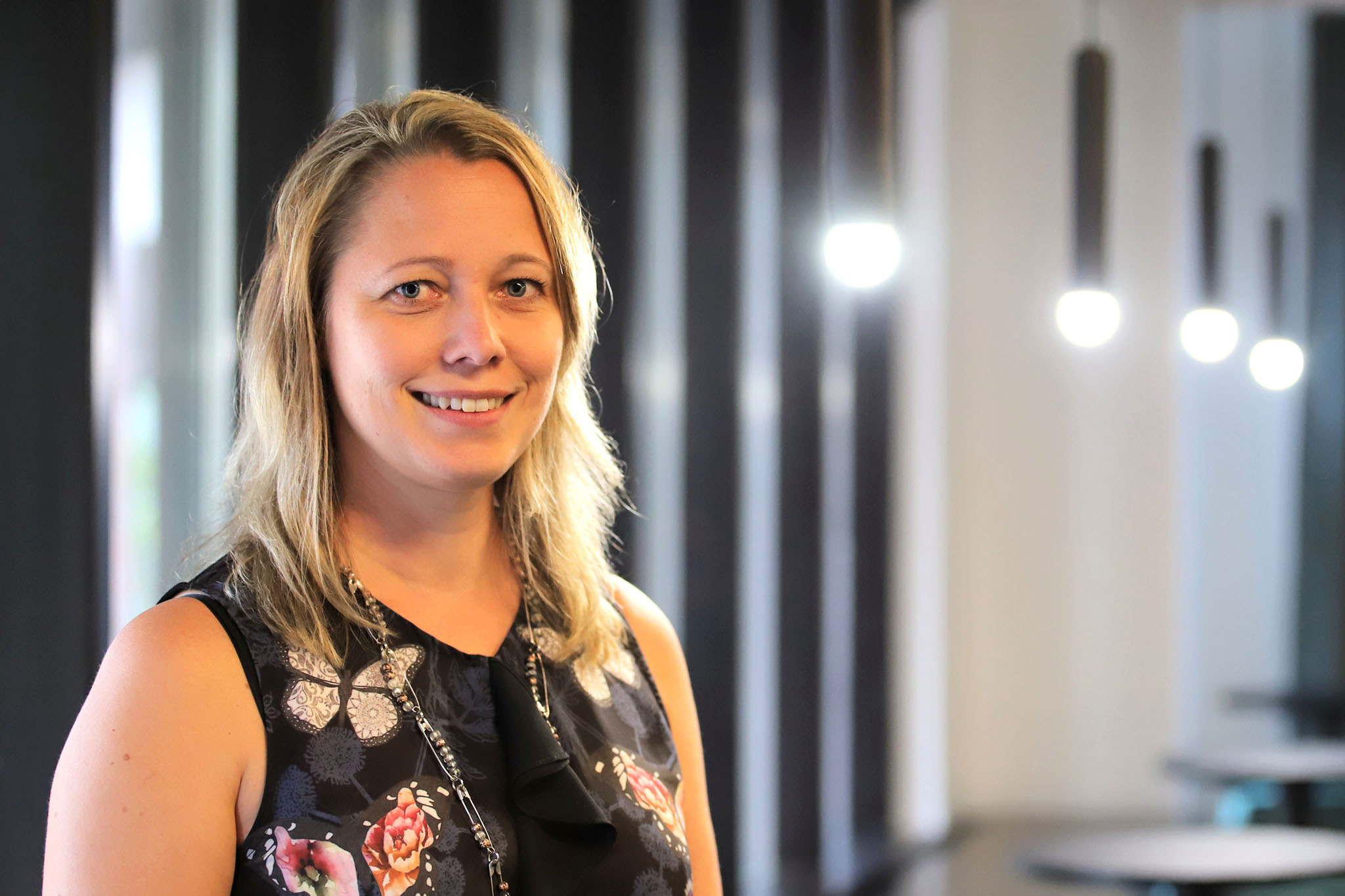 How on earth to identify reliable data?

The UN's Fundamental Principles of Official Statistics instruct statistical authorities to describe in detail how statistics have been compiled. The principle can also be used to assess the reliability of other data generated in society. 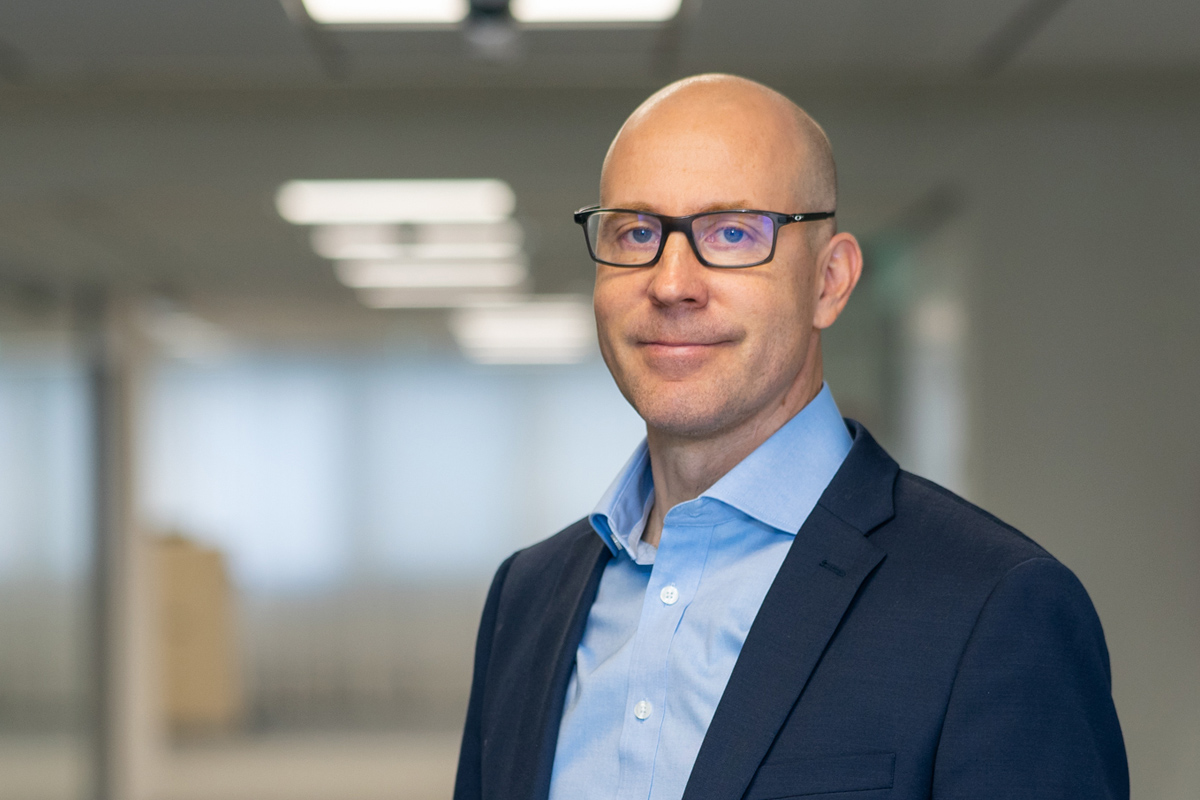 Statistics: a lot of science and a dash of art

We aim to reflect the objective truth with statistics. As not everything can be calculated using statistical methods, statistics still include many characteristics of art. 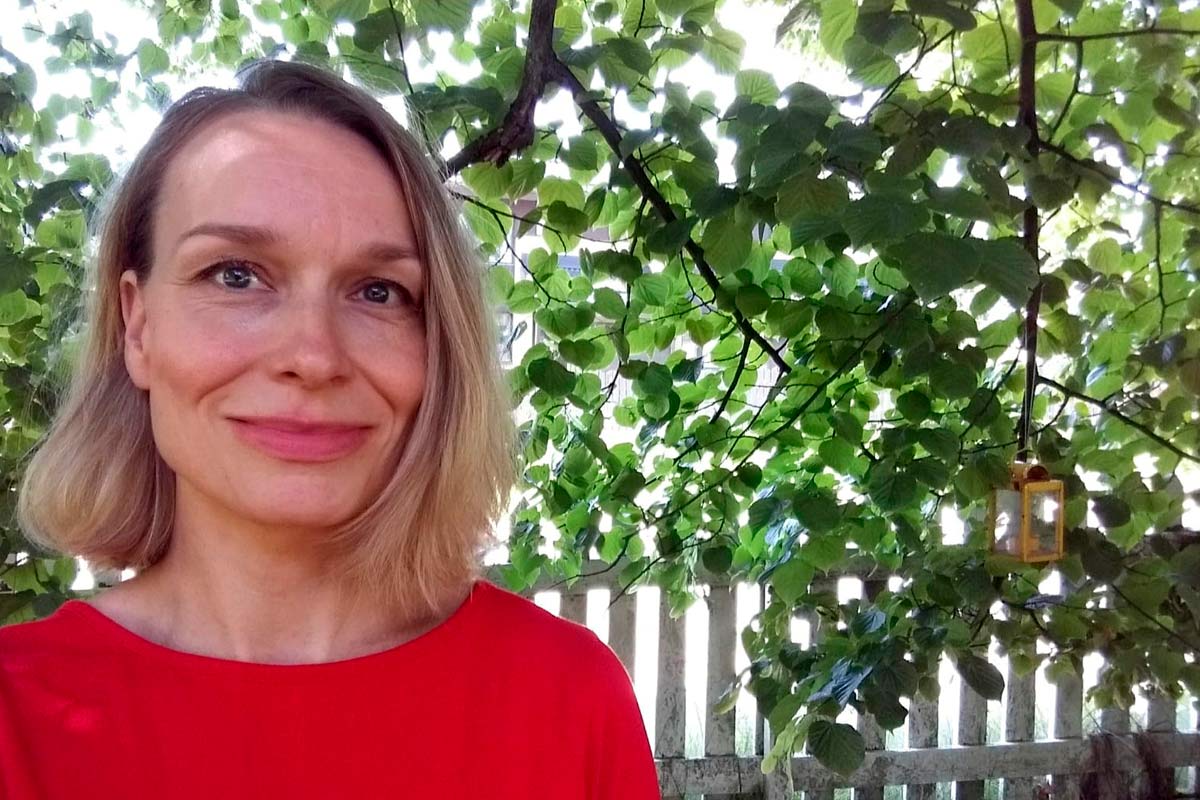 Information collected by statistical interviewers is intended for all of us. People who are selected for interviews of Statistics Finland help us draw a more accurate picture of our time and its characteristics.